P!nk will release a brand new studio album on October 13th, 2017. The album will be titled “Beautiful Trauma”. This will be the American singer-songwriter’s seventh studio album since the release of her first hit album back in the year 2000. It is hardly believable that 17 years have passed since P!nk first released her hit single “You Make Me Sick” from her first studio album “Can’t Take Me Home”.

Just one year later, P!nk was back with her second studio album titled “Missundaztood”. This album received incredible reviews and contained her hit singles “Get the Party Started”, “Just Like a Pill”, “Don’t Let Me Get Me”, and “Family Portrait”. In a time of Britney Spears and boy bands like N*Sync and Backstreet Boys, P!nk used her bad girl image to inspire and attract hundreds of thousands of fans from all over the world. Showing herself as the outcast, many girls and boys could level with her lyrics and image. With the forthcoming album titled “Beautiful Trauma”, it would appear that P!nk has been through some tough times in her life. Once again, her album will help to inspire those who seek hope and comfort through music. 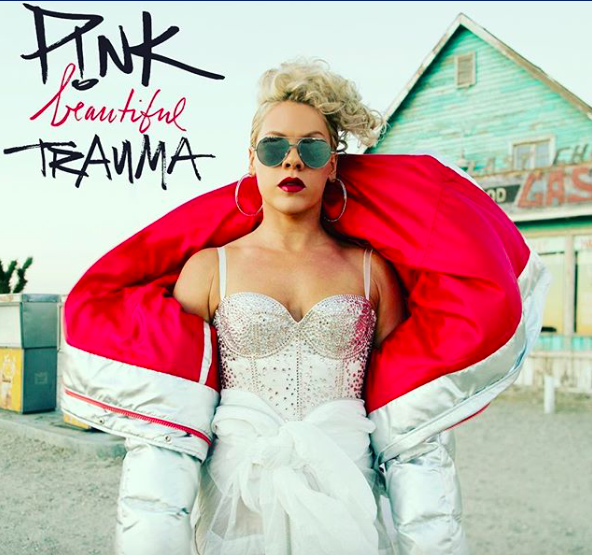 Posted on her Instagram account, P!nk showed followers what her album artwork will look like for “Beautiful Trauma”. Furthermore, the singer-songwriter said “I could not be more excited right now…I’m certifiably, insanely proud of this album. It’s been a while, and I’m grateful for all the years we’ve had. Looking forward to the next chapter with you.”

P!nk’s brand new single “What About Us” was released just yesterday on August 10th. You can check it out below. The song starts off as a slow pop ballad filled with emotion before the chorus picks up to sound more like a slow but embracing club tune. With a pleasant mix of sounds and emotion, the song is sure to be a hit. It also creates more excitement for the album, as fans gear up for more P!nk music that is sure to reach into the depths of their souls.

We also know the entire track list for the upcoming album “Beautiful Trauma”, which you can check out here:

Now it just remains to be seen if P!nk will head out on tour early next year. The singer is set to perform a few shows in the coming months which you can check out below. Unfortunately, most of them are overseas in both Germany and the UK, however the singer will perform one show in Illinois as well as headlining the increasingly popular Kaaboo Music Festival in Del Mar, California.

Here is the brand new single “What About Us” from the upcoming album “Beautiful Trauma”: