American singer-songwriter St. Vincent is set to release a brand new album and see it out with a big tour. Heading to Europe and across the US, St. Vincent will play shows throughout October, November, and early December. Also known as Annie Clark, St. Vincent will release her sixth studio album on October 13th and the album will be titled “Masseduction”.

Co-produced with Jack Antonoff, the album will be the first release since her Grammy award winning self-titled album released in 2014. St. Vincent has stated in an announcement that the album will focus on the themes of “power and sex, imperiled relationships and death”. Furthermore, it will feature plenty of “guitar and piano, synths and strings, and drum beats that punch with purpose.” Sounds like another Grammy award winning album if you ask us!

So far, two singles have been released from Masseduction titled “New York” and “Los Ageless”. St. Vincent has stated that the album really reflects her personal life and features many different aspects from it including snippets from conversations, text messages, and voice mails. She also gathered a lot of inspiration from travelling the world. Furthermore, St. Vincent faced a lot of anxiety and depression after burning herself out in 2014 after her incredible album and touring success. On the road constantly touring and unable to cope with the constant go-go-go lifestyle, the guitarist and singer-songwriter found herself truly inspired by her difficult times. In just over one months time, we will all have more insight into the inspiration that helped to create Masseduction, however for now, we will have to settle with the released singles as well as the track list and tour dates. 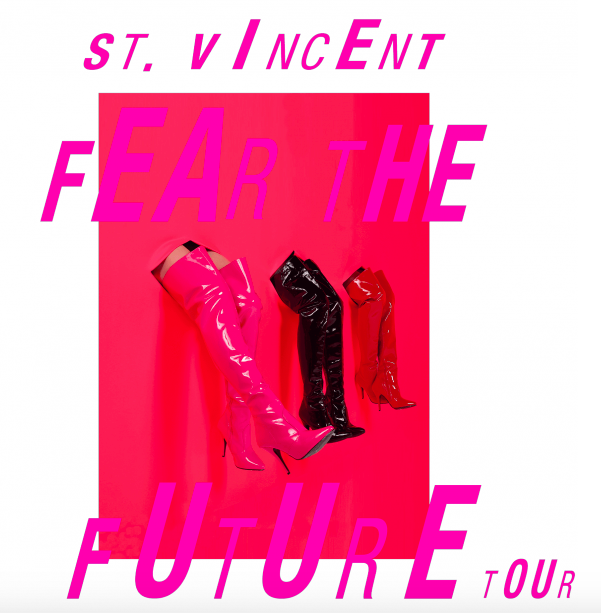 Catch St. Vincent on tour starting in early October. Playing one show in LA, the tour will then head across the pond and play in numerous countries across Europe including the UK, Ireland, France, and Belgium, before returning to the US to play shows across the nation.

Furthermore, those who have tickets to shows in the US (with the exception of Detroit, Indianapolis, and Boston) will receive a complimentary digital download of the album on October 13th.

Check out the video for the first single, New York, from Masseduction: